Father’s Day. A day to celebrate dad’s. But unlike Mother’s Day, gifts are much more difficult. Favorite foods maybe, but flowers and a card don’t usually work. Dad toys tend to cost a whole lot of money. Go big or go home, right? Well, if a new jet-ski, boat, or truck isn’t in the budget, here are a few ideas that anyone can give their father.

My daughters current favorite TV binge is a show called “Leverage.” Last night’s  episode featured an old man who passed up on millions of dollars for a chance to get the one thing he wanted. Respect. In the old days, branding a man a coward was to destroy him. I don’t understand the psychology behind the need, And not that the honor and respect need isn’t common to us all, but seems to be particularly strong among men. 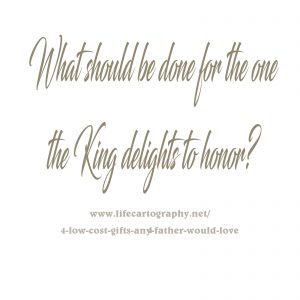 “What should be done for the man whom the King delights to honor?” Ahasuerus asks Haman in the book of Esther, chapter 6. The King understands that the highest compliment and the greatest gift to a man isn’t  money or power but honor. Yet culture and media seem to portray the dad as the buffoon, the emotionally unintelligent, mentally slightly inferior, well intentioned but deficient man. This is as far from honor as you can get.
Honor your father and mother is the first commandment with a promise. Jesus takes the Pharisees to task over their maneuvering out of honoring.
How do you honor?
Speak highly of. Recognize contributions and work. Affirm identity.
But we also honor our fathers by stewarding their reputation. We represent our family. We reflect on our fathers well when we do well in life, leading an upright, Godly life.  Our lives honor or dishonor the reputation of those who raised up. For better or worse, a man is judged by his off spring. Yeah, i get the crazy kid thing and all that, we are responsible for our own choices. But there is no greater way to honor your Father than live a life worthy of honor.

Man do I feel like a strew up. I mess up all the time. And having worked with young adults for a couple decade now, I know there are no deeper wounds that can happen to a child that can be inflicted by a father. A man’s anger can be fierce, his tongue sharp, his physical presence felt.
In every man there is an battle. But even the most arrogant among us approaches fatherhood with trepidation.
Grace is unmerited favor. It’s forgiveness and understanding and gentleness towards. Every father I know needs an extra measure. Our expectation is that Superman never messes up, but Superman occasionally doesn’t get there on time, drops the ball and can’t dodge the bullet. He isn’t from krypton and bullets don’t bounce off his chest. Our fathers carry their own scars but their humanity and frailty is scary to us. So i know what I do. I hide it.
Grace says “I accept that you aren’t perfect and I forgive you in spite of my unmet expectations. “

But even the most arrogant among us approaches fatherhood with trepidation.

What is the gift of seeing Your father? Fathers fill many roles. Provider. Protector, driver, coach, disciplinarian.
If you called your father by his first name, how well could you describe him? There is a temptation to see our dads as a role rather than a person. Giving someone the gift of seeing them is recognizing them as an individual, a person uniquely created in the image of God, with all the complexity and beauty that is built into that.

There is something powerful when you believe in your kids. Something incredible happens when we look our kids in the eyes and let them know we truly believe in them.
Fathers still have dreams. Affirmation and encouragement go a long way in a man’s world. “Out there” it is a “prove it, show me, I’ll believe it when I see it, you gotta believe in yourself (because nobody else will)” world. Many men have locked up dreams, but unlike the kid who dreams of being the fireman or starting a business, the Father’s in our lives often see their dreams at worst maligned, at best ignored by those around them.
The thing with all these gifts is their only cost is thoughtfulness and action. but they are worth more than gold.
I realize that not everyone had the same privilege I had, of growing up in a loving, nurturing environment where it’s easy to honor my father. If that’s you, remember this. Every person is created in the image of God. Without exception. There is something in them you can honor, there is certainly areas you can give grace, and there is alway room someone who sees you as you wish you were and believes with God all things are possible, even seeing dad change.
So to all the dads out there who are mess ups like me, who fail but get back up, who swallow hard and try to be a better man than before, who recognize your failures and brokenness but still keep trying, I honor you today.
And to all you out there, tell me how you are going to implement these ideas today? I’d love to hear practical applications. Please add your thoughts to the comments below.

665 responses to “4 Low Cost Gifts Any Father Would Love”