You are here: Home / leadership / How to know if you are adulting

I had never heard of “adulting” until recently. The phraseology is interesting, and I was to take it one more step.

As an immature teenager, I drove my sister crazy, annoying her about who was more mature. Proving, in hindsight, that I was less mature than my younger sibling. Maybe. That’s still up for debate.

Having spent the last 25 years “growing up,” becoming a father, and working with young adults, here is how I would answer my 16 year old self.

OK, so you think you are mature. I think if you can answer these questions with a yes, you are on your way to adulting in a healthy way.

My kids have chores. It’s a constant uphill battle to get dishes put away, the table cleared and the carpets vacuumed. They will do them. One now does without being asked. The other fights it Every. Single. Day.

I remember once trying to do an exercise with my staff around this idea. I asked them to look around the room and tell me what they sae. Confused, they mentioned the obvious: large furniture items, the lights, simple things. None of them mentioned the little pieces of paper I saw on the floor that needs to be picked up, the carpet that was askew, and a whole list of things I saw that needed to be done to make the room ready to receive guests. Admittedly, I had not prepared them for the task, so the results were not what they might have been.

Asking for help isn’t a sign of immaturity. Having to be told how to help constantly is. The mature see and do without being asked.

Dar Es Salaam Tanzania used to have this great little ice cream shop at a place called the Slipway. Lines were always long. One day, my wife was calmly standing in line behind a number of African ladies, when a woman from another ethnicity that sometimes looks down on locals, arrogantly cut in line. The African ladies were used to this, but my wife was having none of it. Posting on facebook, wearing a shirt, doing a run, those are great. But faced with injustice, my wife let this lady know in no uncertain terms that her arrogance and superior attitude was not acceptable.  When I heard of it, my conflict avoidance personality cringed. The more I think about it, the more proud I am of her. She didn’t post about it on facebook, she confronted the lady. sadly, the store owner didn’t stand with her. The other women in line though, I hope they maybe felt a little more dignity that day.

The mature don’t make excuses for injustice. They act. Racism doesn’t go away with good wishes. Mysogyny, bigotry, and the other ills of society must be engaged and confronted.

For a brief time, I did this thing called “Daddy Bucks” with my kids. It was a reward system where I paid them for doing tasks I wanted done. Picking up dog poop, vacuuming the stairs. Soon, nothing got done without a request for “Daddy bucks” or the question of “how much will you pay me?” My wife wisely shut the system down.

The mature don’t do things for rewards. They see their responsibility in the greater picture, either of a family, towards society, or many other different areas. And they respond. Rewards are nice but not necessary. No one would work for no money, so don’t take this the wrong way. (Work without reward is slavery and that’s evil.) But helping with chores around the house is not work, it’s part of being in a family. 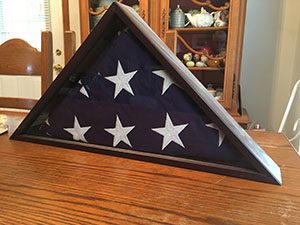 This what what my grandfather received for serving, for being injured in WWII. He did not do it for the reward.

My grandfather fought in WWII. My father has his flag in his office, a reminder of the lifelong cost he paid when he was injured by a landmine. The soldiers who went and died, fought not because they would be rewarded but because they felt a responsibility to their nation and to the future of their children. The mature respond out of responsibility, not rewards.

In 2004, I served under a friend at a University work in Nairobi Kenya. Several years later, I spent a little time in town. One of the young men who worked for the organization, making a starting salary, asked if he could take me to breakfast. We sat at Java house beside the United Nations complex and talked about life. To my surprise, Eric insisted on paying. At that point, I knew Eric was going to do well in life. He valued our time together enough to pay.

I love buying breakfast or lunch for young people and investing in them. That’s not my point. The point is that some things are worth investing your money into.

I know 40 year olds who try to angle to get their parents to pay for small stuff. Listen, I’m as cheap as the next guy, but when I can, I want to pay. Maybe it’s a pride thing.

I have to say this too. I’ve had many seasons in life where I couldn’t pay and others did for me. Once, a friend paid for my broken transmission. Another time, a friend paid for my fishing trip. I’ve had more than one vehicle given to me over the years by generous friends. Needing help is not a reason to feel shame. Maturity receives generosity without shame. Maturity also engages generosity and responsibility.

That’s my quick list. What are some of the things you see as true signs of Healthy Adulting?