You are here: Home / Character of God / Joseph was not a total idiot, and other Christmas myths debunked

There is something wrong with the traditional Christmas narrative. Joseph is too much of an idiot.

But Joseph was not an idiot, and why we have the Christmas story totally wrong.

Joseph was a total idiot. That is, if the traditional reading of the Christmas story is right.
Think about it. The way we make the story out, Joseph has no idea that gestational period for a human being is 9 months. Caesar Augustus suddenly issues a decree and everyone drops everything to run back to their hometown. Mary is 9 months pregnant, due at anytime, and well, we can’t keep Rome waiting so we gotta go now!

Joseph has apparently made no plans and is so unwelcome in his hometown that even though he is a direct descendant of none other than King David himself, he has to resort to staying at a hotel for an indefinite period of time.

And of course, like any loser husband, he didn’t make a reservation ahead of time, because of course, the hotel in Bethlehem, a little hamlet in the middle of nowhere, with a tiny little population, will be full.

Even though Jerusalem is only 5 miles away. Where there would have been plenty of space in the many inns.

Joseph apparently doesn’t listen to dreams well either. Because he knows that Mary is carrying the Son of the Most High, the Hope of Israel, and he is not smart enough to know that if he messes this up, maybe the Most High won’t be too happy with him. I know the whole “lowly in a manger” thing but don’t you think Joseph could have done better than a manger?

Something starting to not sit right with you? Something is wrong with this picture.
Let’s start with the actual story again.

1. First of all, from reading the text, there is nothing to give us the idea that Joseph got Mary to Bethlehem at or on D-day. The text simply says “when the time came.”

Meaning that the logical conclusion is that Joseph and Mary arrived some time before the baby arrived.
If that’s true, then why the whole stable? With enough lead time, couldn’t they have found lodging? First, a linguistic argument and then an explanation about cultural imperialism.

Linguistically. According to Kenneth Baily, the text is misinterpreted at this point. The word used for “Inn” is different than say, in the story Jesus tells of the good Samaritan leaving the hurt man at an Inn. The word used is Katana, which Bailey convincingly argues, is more aptly rendered “guest room.” (The book by Baily is worth the price of purchase just for the first chapter).

Ok, so we concede the point. Joseph has prepared somewhere to stay, most likely with a relative.

When they arrived, the guest room was full. So what, the family throws them in the back stable with the very pregnant girl? The people of Bethlehem should stand condemned with Sodom and Gomorrah on the day of judgment. Culturally, it would have been impossible for the villagers to allow this to go on.
Again, this is where some of our cultural imperialism comes in.

As a boy, I grew up in Holzem, Luxembourg. The neighbors across the street were traditional farmers, and in a design that would have been similar to home building throughout the ancient world, the barn or stable, was connected directly to the home. You could walk freely from one part of the building into the other. Again, Bailey is a great reference on this but what if we considered that all peasants and average people were most likely born in similar conditions. 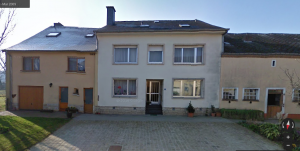 Mary and Joseph were staying in the loft, warmed by the animals, which may seem repugnant to us, but not so to most of the world. There would have been nothing extraordinary about a child being wrapped in a blanket and placed in a manger. Most likely, it happened every day. The manger may have even been in the main part of the house. Most mattresses of the day were most likely made of straw, or rough wool.

The idea is further strengthened by the arrival of the Magi. In our cultural manger scene, we have the kings kneeling in the filth of the manger. But the text says “when they found where he was staying.”

Which brings me to my last thought.

If Jesus was given gifts of gold at his birth, and I’d surmise the kings were at least generous, if not very generous, what happened to the money?!

The conflict in Syria is once again awakening the world to the plight of refugees. Basic necessities of life are difficult to come by. Here is my idea.(Not scripture, but logic.)

Not only is Joseph not an idiot, but God provides for his son.

The gold is used, and wisely, by a small refugee family in Egypt to make sure that there is food on the table and a roof over their heads. Even if Joseph could have found work, which was unlikely in the short term, refugee salaries are never top of the scale.

So it messes with our little manger scenes, but it makes more sense to me.

Jesus’ birth was humble, but it was not destitute.

Joseph was a man of humble means, but not an idiot.

And God the Father did not abandon his only begotten to a life of borderline starvation as a refugee.

God gave Jesus to Joseph and he was a good adoptive father. He cared for his family and he stewarded the Messiah in his early years.

The interesting thing is that the essence of what we learn from this story remains the same. The King born in a manger is still humble. There is no less mystery and no less wonder. But the players have more common sense. And that makes the story even more beautiful to me.