The bullet holes in your marriage.

With the Ray Rice debacle no where near being done, I ran across this article on Coffeestains.com and thought I’d repost today. 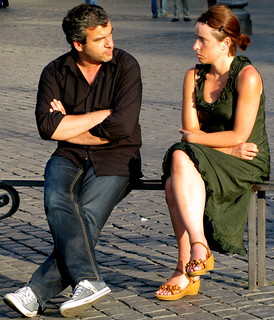 Several years ago an agent of the Drug Enforcement Administration was lecturing a group of kids about gun safety. As he was saying that he was the only one there professional enough to handle a Glock, he shot himself in the foot (or the thigh according to which account you read).

Michael Quinion reports a sobering event recorded in the Appleton Crescent newspaper of August 1857, “Mr. Darriel S. Leo, Consul to Basle, accidentally shot himself through the foot, four or five days ago, in a pistol gallery at Washington, and died on Sunday of lockjaw.” link

People have been shooting themselves in the foot for a long time. But the phrase has taken on another sense in more recent years. According to the Free Dictionary the phrase means, “to do or say something that causes problems for you.” (The Free Dictionary)

Last week I talked about ways to guarantee a divorce. But, those five aren’t the only ways to cause your marriage to flop. Here are three more ways to shoot your marriage in the foot:

1.    Use sex as a tool to manipulate your partner.

Intimacy in marriage isn’t an exchange for getting our way.

Yes, there are times when we really do have a headache, but if your head hurts thirty days in a month, you better get that checked out. It could be mortal—mortal to your marriage too.

If one partner really is physically ill and incapable of sexual relations, then Christ’s grace kicks in and He’ll give both partners what it takes to persevere and remain faithful to their marriage promises.

“The marriage bed must be a place of mutuality—the husband seeking to satisfy his wife, the wife seeking to satisfy her husband. Marriage is not a place to “stand up for your rights.” Marriage is a decision to serve the other, whether in bed or out. Abstaining from sex is permissible for a period of time if you both agree to it, and if it’s for the purposes of prayer and fasting—but only for such times. Then come back together again. Satan has an ingenious way of tempting us when we least expect it.” (1 Cor. 7)

The sexual act isn’t just for having babies either. It’s a gift given to the couple to deepen the heart relationship between them. They share something that they don’t share with anyone else in the world. That makes it extra special. Here’s some advice: even if you’re tired or stressed or whatever, make this a priority.

Ann Voscamp says, “”Your skin is the outer layer of your soul.
“Your skin and your soul are one in ways that Hollywood and MTV and the mall won’t ever tell you. Your skin and your soul are profoundly connected and this is a profoundly beautiful thing. There is no shame in this —  only the glory of God who made your body art to reflect your soul.
“So contrary to what hook-up culture may be touting in the back halls of high schools and behind the closed doors of university dorm rooms — there’s nothing casual about giving away your soul.
“The union of two bodies is nothing less than the union of two souls.” (A Holy Experience)

Excuse my frankness, but in marriage sometimes our body doesn’t want to do what it needs to do until we force it. Once you make the commitment, you might be surprised about how glad you are that you did.

Wow! You still there? I sense that a couple of you are jumping up and down in front of your computer, saying, “Yes!” And some of you are growling and threatening to send me a virus. Hey, take it up with the Lord. I didn’t start this. He did.

2.    Here’s another bullet for your foot-shooting pistol: Be surprised when your life is like a romantic comedy.

That’s what you thought you wanted wasn’t it? There’s a formula for these romantic movies and books– 1. Boy meets girl. 2. Boy and girl are attracted but fight all through the movie and it looks like they’ll never get together. 3. They get together and they recognize that they’re madly in love. Long passionate kiss followed by the theme song and credits.

Can I give you a revelation? If you fight like dogs and cats before marriage you’re probably going to fight like lions and tigers afterwards. My advice would be to forget marriage. What do I know, though? “And if you married the lion … (or the tigress?)”

I’ll pray for you. And, you might want to grow up and learn to disagree like adults. Disagreement isn’t bad. It’s acting like a four-year old that’s bad.

Marriage is GOOD, if both partners love the Lord and work at maximizing this gift of the Lord. Those who look for fairy tales often get whacked upside the ear with the bad fairy’s magic wand. But, for those who plant their feet squarely on the ground (of God’s Word) and decide to do what it takes, the result is well worth it.

3.    One more, in case you’ve missed your number 12’s on the first two– never pray with your spouse.

You don’t know what to say and she/he embarrasses you when they pray so loud and long and, and … In the Kingdom of God 1+1= a whole lot more than two. When you pray with that gift for life that God has given you, you MULTIPLY the power of God in the situation. So, if you don’t want prayer results, make sure you don’t pray with your spouse.

Matthew 18:19 “Again I say to you that if two of you agree on earth concerning anything that they ask, it will be done for them by My Father in heaven. 20 For where two or three are gathered together in My name, I am there in the midst of them.” (NKJV)

So by all means, if you want your marriage to go belly up, don’t pray together. Just saying.You know what? If you’re one of those who really want their marriage to work and you’re naïve enough to work for the dream you had for your marriage at the beginning, you might do the opposite of what I’ve told you these last two weeks.

1,972 responses to “The bullet holes in your marriage.”